I came really close to making some large purchases to improve my video call situation, and I may still do so, but I did spend some time and found a few quick wins maybe will help others:

Here are the tweaks I made that do seem to have improved things:

One thing I cannot figure out how to do is bokeh.  I think that remains a gap between what I’ve got now and higher end gear.

Been a quarter or so since my last post

Wanted to share some updates info about the Service Delivery, SRE team at Red Hat for 2020!

Some of our top level goals:
We’ve got several openings. They’re all REMOTE-FRIENDLY! Don’t worry about the specific titles – they’re a biproduct of how RH backend systems work.

If you think you check the majority of boxes on the job posting, and ESPECIALLY if you’ve done any of these things in the past…please ping us.  We’re actively hiring into all of these roles ASAP.

So come have some fun with us.  Build and run cool shit.  Be at the forefront of operationalizing OpenShift 4.  Develop in go.  Release continuously.

Red Hat does managed services. We do DevOps in the style of the Google SRE Book. We’re a decent sized and growing org that supports customers 24/7.  Our team is at the forefront of operationalizing OpenShift 4’s revolutionary set of capabilities, and are a way-to-market for many of Red Hat’s newest portfolio offerings.

What does a day-in-the-life of a Red Hat SRE look like…  You remember these, don’t you?

If you drop into one of our Slack channels, you might find some interesting discussions on

[I’ve been meaning to write this post for several months]

Earlier this year I changed roles within Red Hat.  My new role is “OpenShift SaaS Architect”, and organizationally is part of Red Hat Service Delivery.

Basically, if you’ve had any interaction with OpenShift 4, you’ve likely consumed those services.

I’d been in my previous role for 7 years, and celebrated my 10th anniversary at Red Hat by being acquired by Big Blue.  My previous team (Red Hat Performance and Scale) afforded me endless technical challenges, opportunities to travel, present, help shape product and build engineering teams from the ground up.  Perhaps most importantly, I had the opportunity to mentor as many Red Hatters as I possibly could.

Red Hat Service Delivery allows me to broaden my technical and architecture skill set to areas outside of performance, scale and optimization, while letting me apply the many hard-fought lessons from prior chapters in my career.

Here are the official docs for building Grafana from source.  And below are my notes on how to build Grafana, starting from a clean Fedora 27 Cloud image.

Download the various repositories required to build.  Here you could also clone your fork/branch of Grafana into $GOPATH/src.

Now you can make any sort of local changes, or just build from HEAD.

The build will spit out an RPM in a folder called dist:

I’m CC’d on mails when things get slow, but never when things work as expected or are fast…oh well.  Like an umpire in baseball, if we are doing our jobs, we are invisible.

I reach for my trusty haiku for this type of thing:

Ah but in this scenario, it is something more…sinister (my word).  What could be more sinister than DNS, you say?  It’s the magical QoS system by which a cloud provider creatively rents you resources.  The system that allows for any hand-wavy repackaging of compute or network or disk into a brand new tier of service…

Platinum.  No, super Platinum.  What’s higher than platinum?  Who cares, we are printing money and customers love us because we have broken through their antiquated finance process.  We will gladly overpay via OpEx just to avoid that circus.

In this scenario, I was working with one of our container teams folks who had a report of CI jobs failing and someone had debugged a bit and pinned the blame on docker.  I watch the reproducer run.  It is running

in a tight loop.  I watch as docker daemon gets through its 5000th loop iteration, and…still good to go.  On average, ~3 seconds to start a container and delete it.  Not too bad, certainly not something that a CI job shouldn’t be able to handle.  I continue to stare at tmux and then it happens…WHAM! 82 seconds to start the last container.  Ahh, good.  Getting a reproducer is almost always the hardest part of the process.  Once we have a tight debug loop, smart people can figure things out relatively quickly.

I am looking at top in another window, and I see systemd-udev at the top of the list…what the…

As much as I would love to blame DNS for this, I have a hunch this is storage related now, because the reproducer shouldn’t be doing anything on the network.  Now I am running ps in a loop and grepping for ” D “.  Why?  Because that is the process state when a thread is waiting on I/O.  I know this because of several terribly painful debugging efforts with multipath in 2010.  Looking back, it may have been those situations that have made me run screaming from filesystem and disk performance issues ever since 🙂

Normally, processes oscillate between R and S, often imperceptibly (well, at least not something you see very often in top).  You can easily trace this with the systemtap script sleepingBeauties.stp if you really need to.  This script will print a backtrace of any thread that enters D state for a configurable amount of time.

Anyway here are the threads that are in D state.

That is interesting to me.  udevd is in the kernel’s path for allocate/de-allocate storage devices.  I am now convinced it is storage.  kworker is a workqueue kernel thread that fires when the kernel’s writeback watermarks (dirty pages) are hit.  For my extreme low latency work, I documented how to shove these in a corner in my Low Latency Tuning Guide for Red Hat Enterprise Linux 7.

I move over to another tmux pane and I try:

I know that if this does not complete in < 5 seconds, something is terribly hosed.  Aaaaaand it hangs.  This process now shows up in my ps loop looking for D state processes.  So I have it narrowed down.  Something is wrong with the storage on this VM, and it only shows up after 5000 containers are started (well, I am told it varies by a few thousand here and there).

This may seem like a tangent but I promise it is going somewhere:

Nearly two years ago, when we were first standing up openshift.com version 3 on AWS, we ran into a few eerily similar issues.  I remember that our etcd cluster would suddenly start freaking out (that is a technical term).  Leader elections, nodes going totally offline…And I remember working with our AWS contacts to figure it out.  At the time it was a little less well-known, and today just by googling it appears fairly well understood.  The issue with this reproducer turns out to be something called a BurstBalance.  BurstBalance is AWS business logic interfering with all that is good and holy.  If you purchase storage, you should be able to read and write from it, no?

As with all public cloud, you can do whatever you want…for a price.  BurstBalance is the creation of folks who want you to get hooked on great performance (gp2 can run at 3000+ IOPS), but then when you start doing something more than dev/test and run into these weird issues, you’re already hooked and you have no choice but to pay more for a service that is actually usable.  This model is seen throughout public cloud.  For example, take the preemptible instances on GCE or the t2 instance family on AWS.

I have setup my little collectd->graphite->grafana dashboard that I use for this sort of thing.  You can see things are humming along quite nicely for a while, and then…yeah. 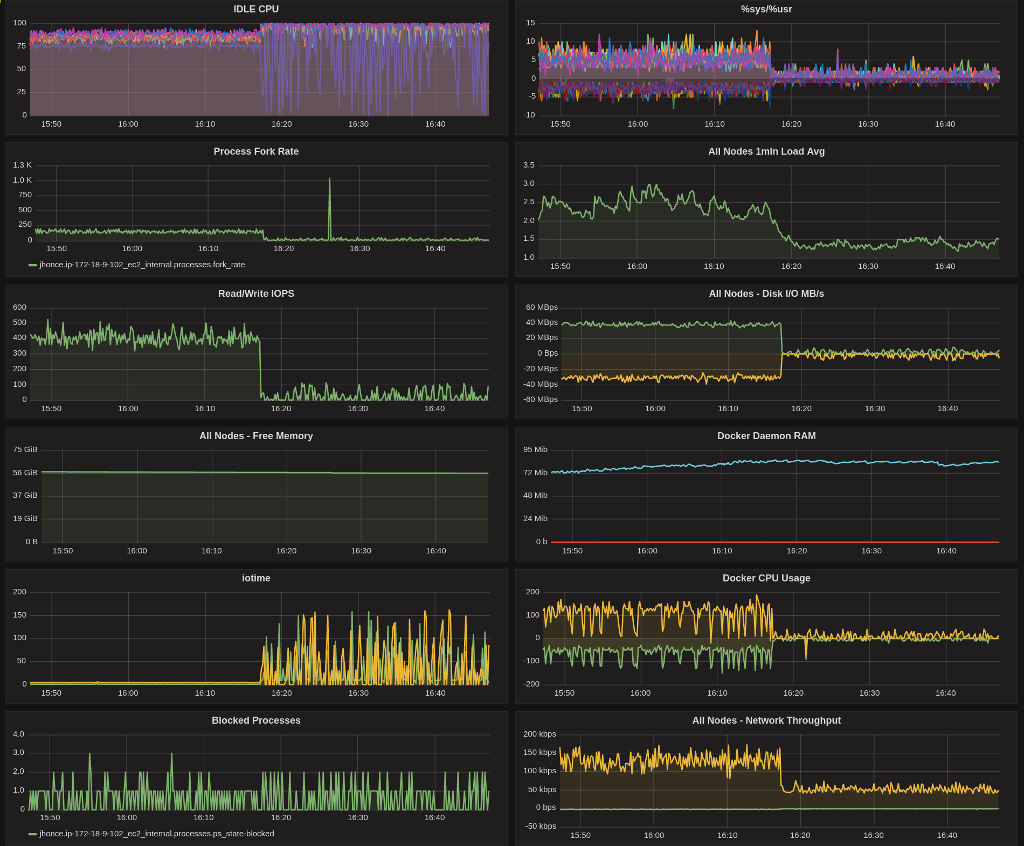 Once the reproducer exhausts the gp2 volume’s BurstBalance, things go very, very badly.  Why?  Simple.  Applications were not written to assume that storage would ever slow down like this.  Issues in docker cascade back up the stack until finally a user complains that it took 5 minutes to start their pod.

The reason is that we have not paid our bounty to the cloud gods. 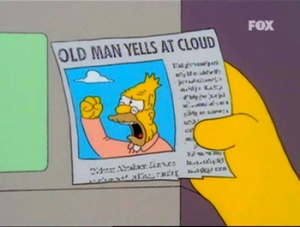 Here is BurstBalance and the magical AWS QoS/business logic in action.

You can see it looks a lot like my grafana graphs…quota is exhausted, and the IOPS drop to a trickle.

What would happen then if we did kneel at the alter of Bezos and pay him his tithe?  I will show you.

The reproducer is chugging along, until it slams into that magical AWS business logic.  Some QoS system somewhere jumps for joy at the thought of earning even more money.  This time, we will pay him his fee…for science.

You can see that our reproducer recovers (lower is better) once we flip the volume type to provisioned IOPS (io1)…this was done on the fly.  We set the io1 volume to 1000 IOPS (mostly random choice…) which is why it is slightly higher after the recovery than it was before the issue occurred.  gp2 can crank along really, really fast.  That is, until…

The take aways from this debugging session are:

I have a few images in my system:

All of docker’s storage right now consumes about 4GB.  It’s important to verify this because the migrate commands we’re about to walk through require this much space to complete the migration:

By default, the atomic migrate commands will write to /var/lib/atomic, so whatever filesystem holds that directory will need at least (in my case) 4GB free.

The migration process has several phases:

I’m using a VM with spinning disks so this takes a little longer than it otherwise might, but let’s start the export:

OK that went oddly smoothly, let’s see what it actually did:

Seems reasonable…incidentally that info.txt just includes the name of the storage driver used at the time migrate was executed.

OK let’s do the deed:

Oh, I guess that would make sense.

OK, at this point /etc/sysconfig/docker-storage is reset to it’s default state, and I have nothing in my docker graph storage.

Because I want to continue to use overlay2, I will use the atomic storage modify command to make that so:

Things are looking good so far.

At this point we are ready to restart docker and import the images from my previous storage.  First let me verify that it’s OK.

Cool, so docker started up correctly and it has the overlay2 storage driver that I told it to use with the atomic storage modify command (from previous step).

Now for the import…

Again went smoothly.  I opted not to have it automatically clean up /var/lib/atomic/migrate automatically because I want to verify a thing or two first.

Images are there.  Can I run one?

Indeed I can.  All seems well.

This utility is very handy in scenarios where you want to do some surgery on the backend storage, but do not want to throw away/download images and containers.  I could envision using this utility when

Either way, this process was about as smooth as it could be…and a very clean UX, too.